While it took a bit more thought work to decide on fabrics for the ornaments, it was a great exercise in putting together a beautiful block to augment the holiday themes presented so far.

The first block I made was a fun one.  I added a black polka dot fabric with reds and greens.  It fit with the other blocks nicely, yet I couldn’t stop thinking the fabric was more traditional than those I started with from the Christmas on Brambleberry Ridge bundle and didn’t feel at home with the overall palette. 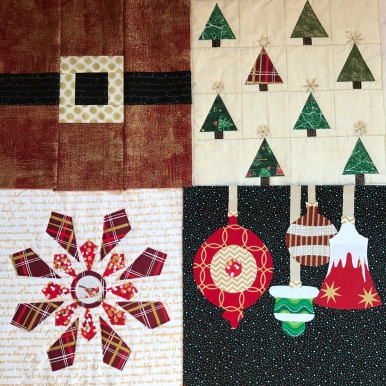 With that on my mind, I went about making up a new block and am much happier with the text background.  I’m definitely open to doing another set using the polka dot fabric as it was colorful and playful, though I’ll stick to my guns with Brambleberry Ridge for this quilt-along.

Here is the final block.   I am so much happier with it than the first one…though the first overall palette makes me think I need a second quilt which would be more playful in nature.   Sigh, if only there were more hours in a day! 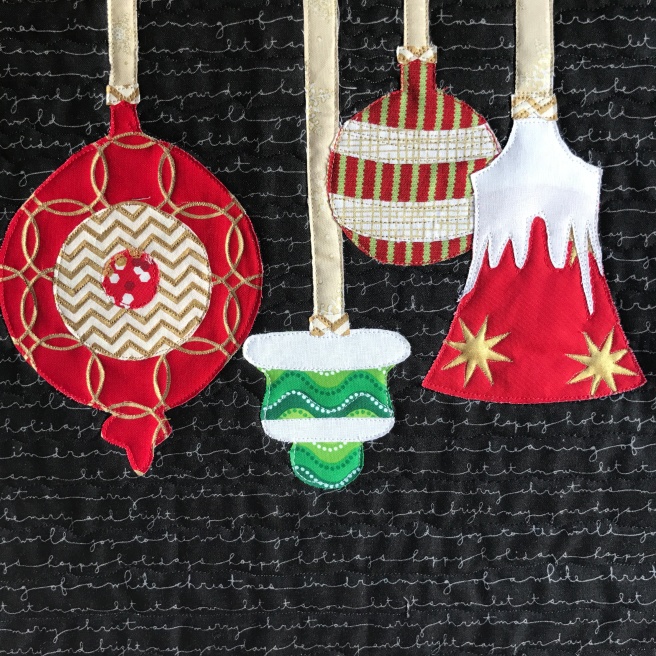 And the trio of appliqued blocks (without the tree farm which is undergoing renovations.  🙂

The backings are as cute as the fronts. 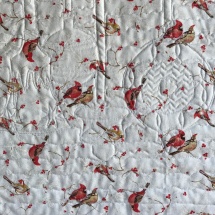 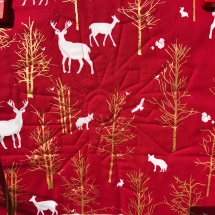 Lessons were learned with my first “quilt as you go” set of blocks.  Vanda, from Quilt in Piece had recommended cutting the background slightly larger if we were to use the quilt as you go method.  I did so, yet was still surprised with denser quilting just how much shrinkage the block took.  I am happy I didn’t trim the blocks before quilting so there will be room at the end to size them all accordingly, as I suspect that each block will be a variable size based on my actual quilting.  Vanda had also suggested after she quilted her snowflake pieces that she might do more quilting once the blocks were assembled and I’m questioning whether I should have paid more attention to doing the same.  That way shrinkage may have been more minimal.  In any event, there is still plenty of room around all my blocks for trimming so I should be fine!

I am looking forward to block 5, scheduled to be posted on September 12th!

5 thoughts on “I Wish You a Merry QAL Block 4, Christmas Memories”